With the cPRO ONE, cPRO and cPRO PLUS, you can choose what’s right for you. Whichever you choose, cPRO will cover your needs for any shoot.

The cPRO ONE may be the entry-level hand unit in the cPRO range but it is packed with all of the cPRO software features as well as being compatible with camera control and data licenses. And, despite the name, cPRO ONE can actually control up to 2 axis (when assigning 2nd axis to the thumb wheel). Affordability and functionality also makes cPRO ONE a great 2nd hand unit for DPs or DITs for those big projects. Same ergonomic design, same quality, same rich features – for ONE axis control.

The NEW cPRO ONE hand unit is the latest addition to the cPRO family. Packed with the same innovative features the cPRO ONE is developed from the original (Cine Gear Technical Award-winning) concept of the cPRO LCS. With its smooth control knob, mechanical limits, and unique “panic button”, the cPRO ONE is an ideal addition to any existing cPRO LCS network, allowing any axis to be assigned to an independent wireless controller. But, that’s not all. By assigning the integrated thumbwheel, the cPRO ONE can be used as a versatile two axis controller.  Compatible with cmotion’s Cinefade VariND through either a cPRO motor or cPRO camin, cPRO ONE can also be assigned for dynamic variable ND / RotaPola control or the (Cinec Award-winning) Cinefade effect, independent from the focus puller.

Whether you are looking to split out iris control from an existing cPRO LCS, get creative with the Cinefade VariND, or simply start out with a new revolutionary ONE (or two) axis lens control system, cPRO has you covered.

The cPRO offers a set proven 3 to 4 axis control with an intuitive and ergonomic design. It is packed with useful features and functions but can also be upgraded with camera control and data licenses at any time.

The cPRO hand unit is a feature packed work horse offering ultimate control in a balanced and ergonomic design. Introducing innovative features inspired by the focus puller community, cPRO supports the needs of the most demanding focus puller.

The intuitive thumb wheel positioned beneath the touch display provides quick and easy access to the cPRO’s extensive menu settings even while wearing gloves. In addition, the thumb wheel can be assigned as a fully functional 4th axis controller.

Everything we have developed for cPRO is now available in a new sleek and sophisticated design. Finished in stealth black with space grey elements, cPRO PLUS is fully loaded with all cPRO licenses and offers internal knob torque adjustment and three additional user buttons to ensure control is at your fingertips.

The cPRO PLUS a new ALL-IN version of the innovative cPRO LCS hand unit. Bringing together cmotion’s greatest development in ergonomics, mechanics and software in a new stylish high end design.

Finished in high-end black anodized aluminum with space grey design elements, cPRO PLUS is strong and sophisticated for any shooting environment.

cPRO PLUS adjusts to your style with its advanced focus knob providing variable torque adjustment. This offers greater versatility to owner-operators and rental houses.

To maximize access to the growing number of cPRO features, we have added 3 soft user buttons to the back of the advanced focus knob to ensure all your customized key features are always at your fingertips.

Finally, cPRO PLUS would not be complete without ALL of our unique camera control and data licenses loaded and ready to go. So, when you see or work with a cPRO PLUS, you know it is top of the line with all available cPRO features, including ARRI, RED and SONY camera control plus our latest DATA license.

Mechanically, the cPRO motor is based on the popular cforce mini. However, this motor benefits from a built-in cmotion Red RF module and an optimized motor and gearbox for increased speed and reaction.

Incorporating the wireless module into the motor eliminates the need for an extra unit being mounted on the camera. This combination reduces weight, cables and setup time of a ready to shoot system.

Using the LBUS interface, the cPRO motor set can be expanded with up to 3 additional cforce motors can be connected in daisy-chain for a full 3 axis system + one optional auxiliary axis. The new CAM connector provides a versatile interface for power supply, run/stop control, camera feedback*, tally* and camera control

*Not available on all cameras

As an alternative to the cPRO motor set, and for customers with existing cforce motors, cmotion offer a cPRO camin set.

This kit includes the smallest wireless motor box ever developed by cmotion. Using the LBUS interface, up to 4 cforce motors (mini or plus) can be connected to the camin to create a full 3 axis system + one optional auxiliary axis for use with the cPRO hand unit. The new CAM connector provides a versatile interface for power supply, run/stop control, camera feedback*, tally* and camera control** for popular cameras including ARRI, RED, SONY, CANON, BLACKMAGIC and PANAVISION.

Through RED’s open protocol, the cPRO camin kit (with optional cable) can even control the internal focus and iris scales on EF lenses for an ultra-lightweight configuration (e.g. for drone and gimbal applications).

Command mode allows you to use the cPRO camin to enable wireless for non-wireless devices or to use it as a range extender.

*Not available on all cameras 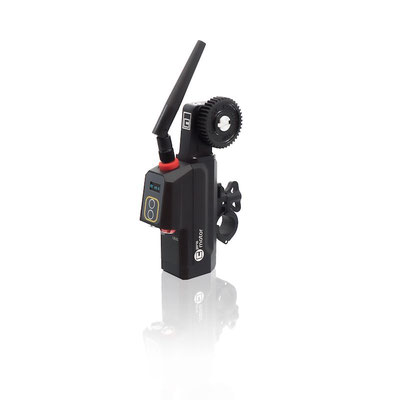 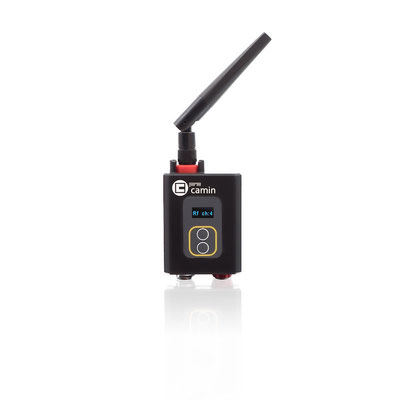 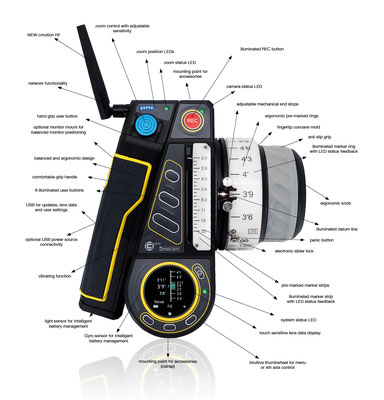 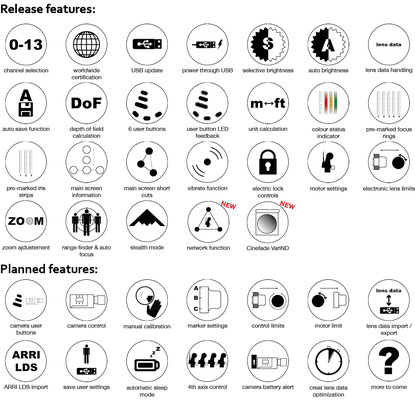 cPRO PLUS motor kit 2, including:

PRO PLUS camin kit, including:

cPRO ONE motor kit, including:

cPRO ONE camin kit, including:

With integrated dovetail slide. Includes magnetic inserts for use with 15mm support rods.

With integrated dovetail slide. Includes magnetic inserts for use with 15mm support rods.

infrared laser range finder - range from 0,3m to over 150m (including refelctor sight)

Our services are exclusively offered to commercial customers and not to private individuals. All prices are net prices plus value-added tax. All specifications and prices are subject to change without prior notification. Errors and changes excepted.